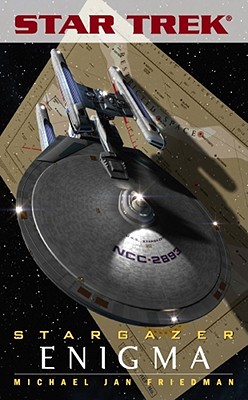 Without warning, a Starfleet ship is overwhelmed by a mysterious, alien aggressor -- one who appears to possess an intimate knowledge of the vessel's tactical technology. Then a second Starfleet ship is attacked. And a third.

Twenty-eight-year-old Jean-Luc Picard, captain of the "U.S.S. Stargazer" -- a "Constellation"-class starship -- is ordered to help form a desperate line of defense against the aggressor. But it seems nothing can stop the aliens' headlong plunge into the heart of the Federation.

Or rather, nothing in "front" of them can. Trailing one of the alien attack formations is a tiny Starfleet shuttle with a half dozen crewmembers aboard. One of them is Picard's first officer and best friend, Gilaad Ben Zoma.

Another is Arlen McAteer, the ambitious admiral who has made it his business to relieve Picard of his command.

Can Ben Zoma and McAteer work together to unlock the secret of the alien assault? Or will their differences sabotage their effort -- and deprive the Federation of its last hope for survival?